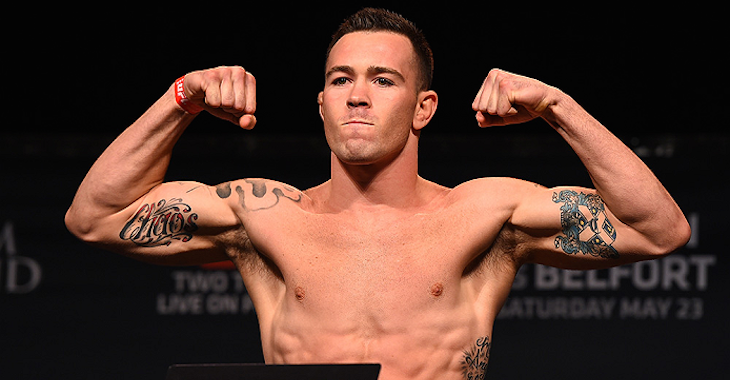 In the first fight on FOX Sports 1, Mike Pyle took on Colby Covington.

After a brief feeling out process, Covington went for a takedown. He managed to clinch Pyle on the cage  and landed short shots. One of those short shots happened to be a knee right to the ‘lower area’ of Pyle. The fight was stopped so that Pyle could recover from the low blow. It restarted in the center of the octagon and Pyle looked for a head kick that was blocked. Again, Covington pushed Pyle to the cage and looked for a takedown. Pyle grabbed on to a Kimura and tried to lock it up as Covington took him down. Covington was aware and stood out of it, then managed to get Pyle to the ground. Covington, working out of Pyles’s full guard, threw short punches to the body and head. Pyle did a good job of keeping Covington close and unable to posture up with big shots. The round ended with Covington still in full guard.

The second started and Covington basically ran across the cage and tried to get a takedown. He forced Pyle to the cage but they separated shortly after. Covington started coming forward with his punches, landing a few big ones before getting Pyle on the cage again. He managed to drag Pyle down to the ground, where he worked from sided control. Pyle was able to get it to full guard. Covington smothered Pyle from the top, not doing a lot of damage, but keeping Pyle from doing anything off his back. The fight went back to its feet but nothing significant happened before the round ended.

Pyle almost landed a nice flying knee, but Covington grabbed him and tried for a takedown. Pyle seemed to have a guillotine locked in but Covington shrugged him off and scrambled to get another takedown. Again, Covington worked out of Pyle’s full guard. Not a lot of action happened from here. Pyle threw up his legs to look for an armbar, but Covington was never in danger and moved to side control briefly, then back to full guard. With a minute-thirty left in the fight Pyle looked for a Kimura from his back. With that Pyle managed to reverse his position and get Covington’s back. After threatening with a choke, he found himself on the bottom again, in the same position he had been in for most of the fight.