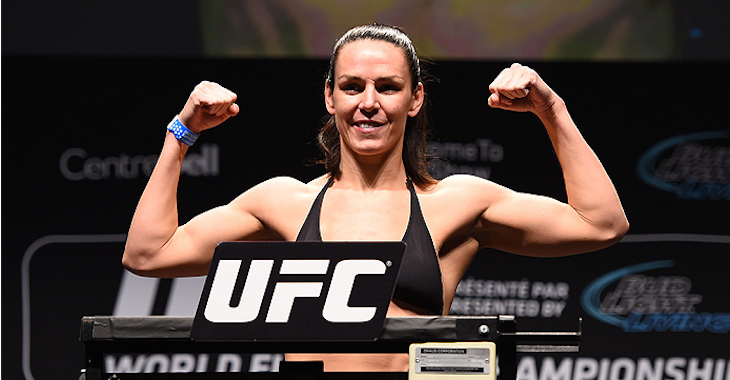 Third time is the charm for Alexis Davis against Sarah Kaufman!

Sarah Kaufman looked to be in control at the start of the fight as she outstruck Davis on the feet. Davis kept circling toward Kaufman’s power hand and her face got busted pretty bad in the first five minutes. However, Davis listened to her corner in between rounds and gained control by circling away from Kaufman and landing a takedown.

Davis landed a takedown and ended up in full mount right away. Kaufman tried to buck her off, but Davis countered the buck by landing a mounted triangle! After realizing she wasn’t going to choke Kaufman out on top, she switched positions so she was on her back working for the triangle. Kaufman, desperate to escape, started punching and left herself susceptible to an armbar!

By the time Davis locked the hold in, Kaufman was already done. She tried to tap out, but the referee was in the wrong position and didn’t see her tapping. Kaufman then had to verbally submit in order for the referee to wave the fight off.

Alexis Davis def. Sarah Kaufman by way of Submission (Armbar) 1:52 of Round 2