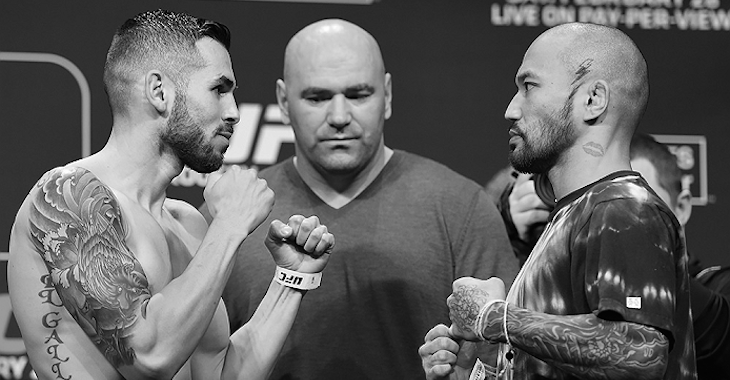 Bantamweights Kid Yamamoto and Roman Salazar met in the UFC octagon in the third fight on FOX Sports 1. Yamamoto came in with a 18-6-1 record, while Salazar has a 9-3 record. Both fighter are coming off of losses, with Yamamoto having not won in his last 3 fights.

This fight started right away. Yamamoto leapt forward immediately, looking to land a big shot. Yamamoto tired to utilize his jumping in style, while Salazar stayed calm and looked for a counter. The fighters circled the octagon looking to land strikes. The fight was stopped briefly due to an eye poke suffered by Yamamoto. Yamamoto landed some really nice leg kicks during the first round. No major strikes were landed by either fighter.

In the second Yamamoto came out and threw a leg kick that was immediately countered with a takedown from Salazar. The fight went right back to the feet. Another eye poke stoppage, this time suffered by Salazar took place in the second. The fight continued to look similar to the first round. Another eye poke to Salazar stopped the fight. This time the doctor was brought in to look at it. The fighter, referee and doctor took their time examining the situation. Eventually Salazar was asked the simple question “can you fight?” Reluctantly Salazar said that he wouldn’t be able to fight because he couldn’t see. The fight was called off.

Results: No Contest due to accidental eye poke at 2:37 of round 2.