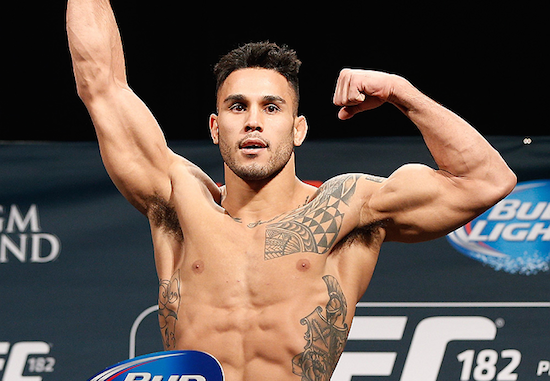 Middleweights Brad Tavares and Nate Marquardt fought in the ninth fight of the night. Tavares came in having lost his last two, although he had won 5 of his last 7. Nate ‘The Great’ Marquardt had won 7 of his last 12 fights, including his win over James Te Huna in June.

Tavares looked to be the aggressor in the early going of round one. The Hawaiian fighter landed a solid body kick and leg kick, while Marquardt stayed patient, looking to counter. Tavares landed a good right hand, Marquardt answered with a front head kick. Both fighters remained patient, as the crowd began to grow restless. Tavares continued to control the center of the octagon, while ‘The Great’ circled on the outside. Tavares landed his own front kick to the face of Marquardt to end the round.

Marquardt went for a single leg takedown in the second round, but ate a kick to the face coming and eventually let it go. The fighters clinched briefly, but broke apart without either taking any damage. Tavares’ leg kicks started landing with power. The crowd let their feelings be heard in the second, probably due to the slow methodical pace of the fight. Marquardt looked to clinch and get a trip against the cage, but Tavares showed excellent takedown defense.

Tavares looked to land more on his feet in the third, while Marquardt insisted on clinching against the cage. Tavares’ jab and uppercut started to land with consistency. Tavares finished the fight landing punches and kicks at will.