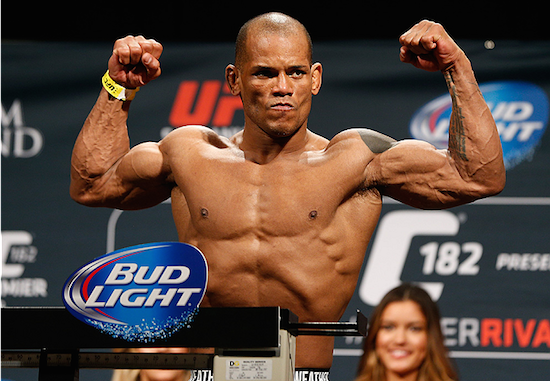 The Main card has started! Up first were the welterweights. Josh ‘The People’s Warrior’ Burkman went up against Hector ‘Showeather’ Lombard. Burkman had won 6 of his last 7 and returned to the UFC after going 9-2 outside of the promotion. Lombard, who enters the octagon with a 3-2 record in the UFC, brought a 2 fight win streak with him. With 22 KO’s to his name, the Cuban Olympian in Judo looked to add another finish to his record.

Burkman landed a good right hand in the first exchange between the two. Burkina looked to hit and move, and landed another right hand to the head of Lombard. Burkman moved side to side while Lombard walked forward, putting his hands down at moments. The pace of the fight stayed at a slow and steady one as each fighter looked to implement their game plan.

In the second both men came out swinging. Burkman landed a few good body kicks. Burkman and Lombard began to trade back in forth in furious exchanges, both landing massive shots. Burkman with his hands down stood right in front of Lombard and dared him to come forward. Burkman kept up with the taunting for the remainder of round two.

In the early going of the third round, Lombard secured a takedown and went to work from Burkman’s half-guard. Eventually Lombard made it to side control before Burkman made it to his feet. Lombard landed a series of hard punches that looked to rock Burkman, but still The People’s Warrior kept coming. Lombard continued to land hard leg kicks and punches while Burkman survived.