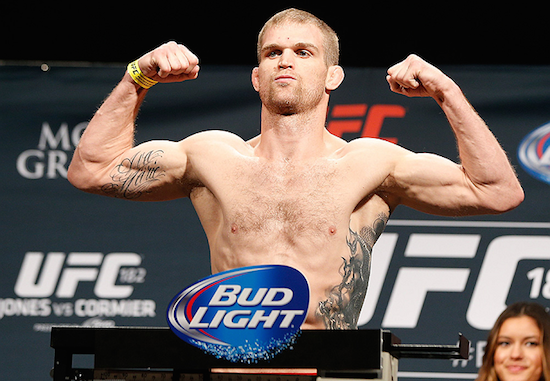 The FOX Sports 1 prelims kicked off with lightweights Evan Dunham and Rodrigo Damm. Dunham was looking to get back in the win column after dropping his last three fights. Damm, who was a member of Team Belfort on TUF Brazil, is also coming in having lost multiple fights in a row.

Both fighters, BJJ blackbelts, looked content with trading punches early on. Dunham used his long arms to land his jab consistently. Dunham’s strikes were connecting, while Damm looked to try and counter. Late in the first, Damm continued to eat punches and kicks from Dunham. Damm failed to find his range in the first.

Early in the second Dunham’s punches opened up a cut somewhere on Damm’s left ear. The once top contender in the lightweight division looked sharp and focused as he continued to land on the feet. Damm’s body language began to show some frustration. Dunham finishes the round strong and went into the third most likely up two.

Damm picked things up in the third, but Dunham kept his reach advantage and continued to land with fluidity. As the fight went on in the third, Damm looked to land a big punch and began trying to get Dunham to get into a brawl. Dunham stayed poised and kept landing his jabs and combinations.