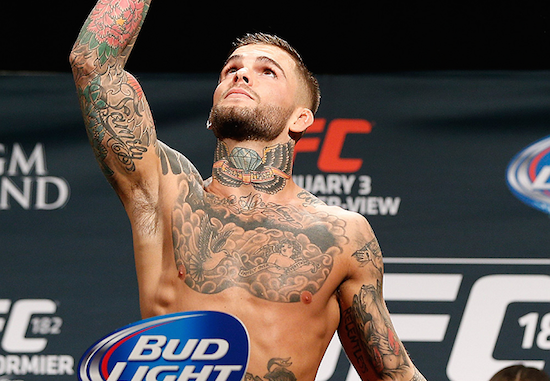 From the heavyweights to the bantamweights. In the fifth fight of the night, Marcus Brimage went up against Cody Garbrandt.

Brimage came in having won 5 of his last 7, while Garbrandt brings with him an undefeated record with 5 wins under his belt. Both fighters exchanged in the early going of the fight. A low blow to Garbrandt paused the action briefly, but the face paced action continued when he recovered. At one point in the first, Garbrandt put his hands down and encouraged Brimage to bring it. After a moment spent on the mat, with Brimage on bottom, they returned to their feet. Brimage delivered another kick to the groin of Garbrandt that paused the action. Garbrandt seemed confident in his UFC debut, unleashing several flashy striking techniques. Brimage seemed to get stunned right at the end of the first round, but the bell saved him from further damage.

Brimage came out in the second and unleashed a ferocious combination while Garbrandt’s back was on the cage. The fight remained on the feet and both fighters were able to find some success with their standup. Garbrandt’s left hook landed several times in the second, but Brimage continued to move forward and trade.

Two minutes into the third round, Brimage tripped Garbrandt with a kick and went to the ground. After a triangle attempt by Garbrandt, both fighters returned to their feet and kept up the face paced striking action. With 30 seconds left Garbrandt landed a huge left hand that dropped Brimage. From there, Garbrandt stayed on Brimage, landing several huge shots until again Brimage dropped and the referee stepped in to stop the fight.

Results: Garbrandt wins via TKO 4:50 of Round 3