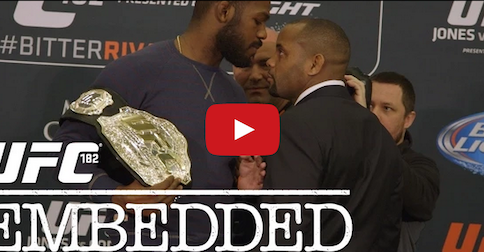 On episode #4 of UFC 182 Embedded, the bad blood nearly boils over between light heavyweight champion Jon Jones and challenger Daniel Cormier. “DC” connects with his family before playing to the crowd at open workouts. After breaking down Cormier’s game plan, Jones spends his New Year’s Eve training. Lightweight Myles Jury opts for a quiet night in, while his opponent Donald Cerrone hits the Las Vegas Strip for fireworks. The next day, things get heated as Jones and Cormier – and even members of their camps – face off at Ultimate Media Day. UFC Embedded is an all-access, behind-the-scenes video blog series focusing on the days leading up to the hotly-anticipated UFC 182: Jones vs. Cormier event, taking place Saturday, January 3, on Pay-Per-View.