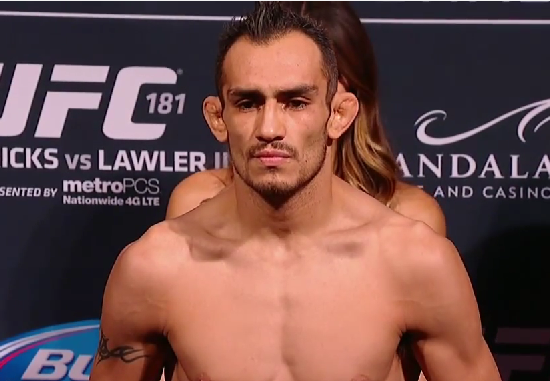 Trujillo dropped Ferguson with a hook and sent him to the canvas.

Trujillo scored a big opening round as he dropped Ferguson in the opening minute of the fight. Ferguson recovered quickly and was able to get his wits back, but it was Trujillo’s striking that would shine for the remainder of the round. He more than doubled Ferguson’s total landed strikes, but Trujillo’s conditioning started to fade toward the end of the round. Right before the horn sounded, Ferguson was starting to pick up a decent amount of momentum.

Ferguson picked up where he left off in the second round, smothering Trujillo with his grappling skills. He transitioned from submission to submission and he kept Trujillo on his toes the entire round. Trujillo was trying his hardest to make it to the end of the round but Ferguson would not give up with the submission attempts.

Ferguson took the back of Trujillo with fifty five seconds left in the fight. Trujillo presented his neck on a silver-platter and Ferguson jumped on it and locked in the rear naked choke. Trujillo slumped to the mat and had nowhere to go. He submitted and referee Big John called a stop to the fight.

Tony Ferguson def. Abel Trujillo by way of Submission (RNC) 4:19 of Round 2