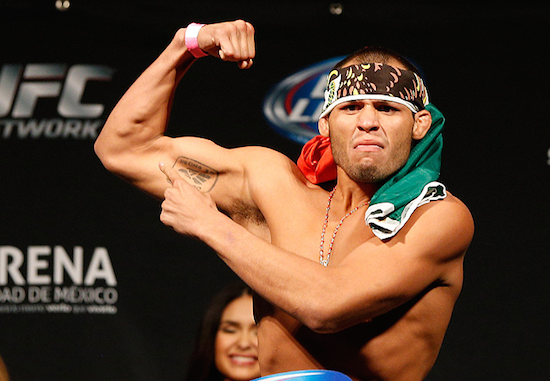 Edgar Garcia and Hector Urbina kicked off the PPV portion of “UFC 180”.

Urbina walked into the octagon looking calm, cool and collected. As soon as the bout started, his demeanor did not change and he was loose from the start, firing off devastating leg kicks. The strikes would not last long as Garcia was looking to take the fight to the ground. Garcia soon had the back of Urbina, but he was not able to lock in a rear naked choke. Urbina turned the tables and gained top control.

Urbina almost walked into an armbar, but he made his way back to his feet and waited for Garcia to stand back up. Urbina pressed him against the fence as soon as he stood back up and trapped him with a guillotine. With his hands in position to crank, Urbina pressed Garcia’s back up against the fence and proceeded to crank hard. Garcia opted to tap out rather than pass out.

Hector Urbina def. Edgar Garcia by way of Submission (Guillotine) 3:38 of Round 1