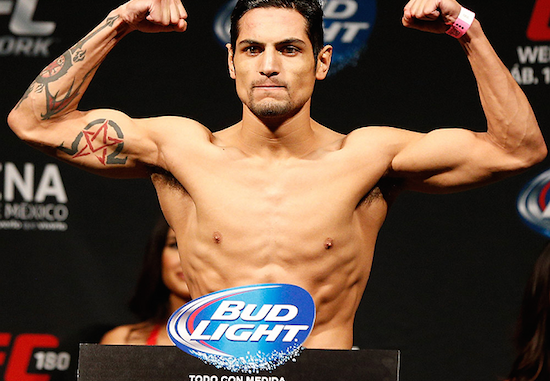 If there is one thing we can take away from this bout, it is that Humberto Brown is ELUSIVE. He was able to escape guillotine after guillotine even when it looked like he was done for.

One thing we learned about Benitez is that he is a persistent little bugger. Despite getting shut down for the guillotine several times, he still went for it and eventually put Brown to sleep with it in the third.

Benitez rocked Brown with a combination that forced him to shoot for a takedown. While Brown was going for the takedown, Benitez was able to put his hands in position for a guillotine. Even though he was standing, Benitez still garnered enough momentum to crank the hold and put Brown in some danger. Instead of defending the choke, Brown opted to continue working for the takedown. Eventually, the pressure became too much for him and he passed out. Brown fell backwards onto the canvas where Benitez followed through with the hold the entire ride down.

The referee waved the fight off and Benitez proceeded to celebrate.

Gabriel Benitez def. Humberto Brown by way of Submission (Guillotine) :30 of Round 3