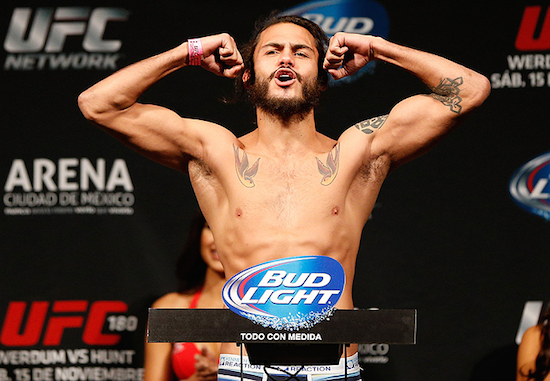 Marlon Vera suffered a skin infection while competing for a contract on “The Ultimate Fighter: Latin America” and was forced to pull out of the show. Tonight, he got to prove himself in the octagon against fellow bantamweight Marco Beltran in the first fight of the night of UFC 180. The bout aired on UFC Fight Pass.

Vera proved to be a scrappy grappler who would have faired well with this season’s cast of athletes. He was adaptable in all situations and capitalized on Beltran’s mistakes. However, Vera had multiple opportunities to submit his opponent throughout the fight but Beltran was able to escape with ease. Vera needs to work on his finishing skills if he wants to be a threat in his division.

Beltran was elusive in his defense as previously mentioned. Not only was he able to escape submission attempts with ease, but he also turned the tables on Vera and ended up on top in scrambles.

Vera walked into the third round knowing that he had to do something drastic to win the fight as he gave up positioning too many times in the first and second rounds. He was able to trap Beltran in a D’Arce Choke in the closing minute of the fight, but again, he could not lock it up well enough to force Beltran to submit.

Marco Beltran had his hand raised at the end of the judges’ decision, making him the first UFC fighter to win a fight in Mexico.