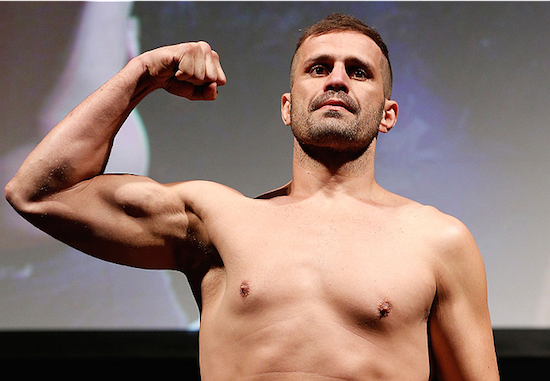 Fabio Maldonado revived the Brazilian crowd with his victory against Hans Stringer! This was the first finish of the pay-per-view portion of “UFC 179”.

Maldonado was facing some trouble in the opening round of the fight as he could not gain any momentum. Stringer tried to wrestle his way to victory as he wanted no distance between the two fighters. The lack of distance restricted Maldonado from striking. Once Maldonado took Stringer down in the second round, it was all over.

Maldonado was able to take advantage of a tiring Stringer and took him down toward the end of the second. He unloaded with punch after punch and Stringer did not improve his positioning. The referee was forced to step in and stop the bout.

After the fight was stopped, Maldonado was embraced by former UFC middleweight champion Anderson Silva. Maldonado was a former trainee of Team Nogueira.

Fabio Maldonado def. Hans Stringer by way of TKO (Strikes) 4:06 of Round 2