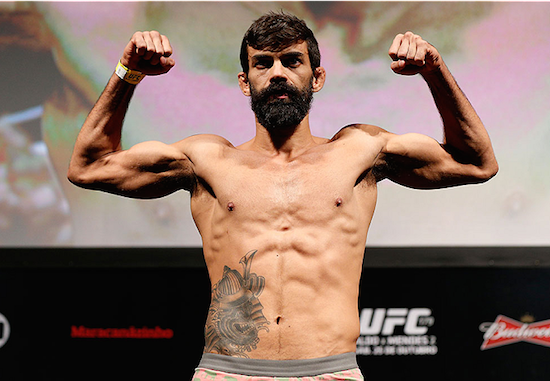 Cabral utilized his grappling skills to grab a victory on his home soil tonight in Brazil. This was the co-main event of the Fox Sports 1 preliminary portion of “UFC 179”.

Cabral’s first fight at lightweight tonight went as smooth as butter. He was able to outwork Kotani for most of the fight and eventually took him down with ease in the second round. Kotani offered nothing for the grappling ace on the mat and ultimatly gave up his back within minutes of the second round. Cabral jumped on his neck for a rear naked choke and it was moments from being over. Cabral cranked the hold and Kotani was forced to submit, with nowhere to go.

Cabral stated after the bout that it was a healthy weight cut and he is in lightweight “to stay”.

Yan Cabral def. Naoyuki Kotani by way of Submission (RNC) 3:06 of Round 2