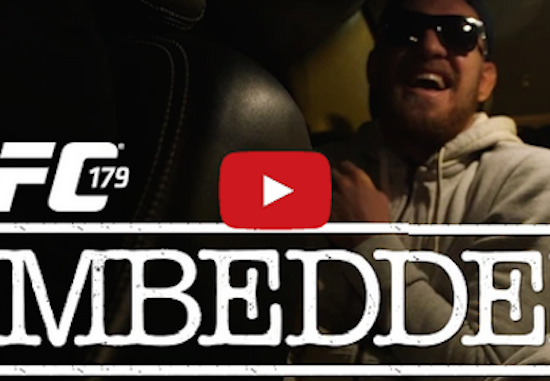 On episode #3 of UFC 179 Embedded, featherweight champion Jose Aldo and challenger Chad Mendes, no longer on separate continents, come too close for comfort at the team hotel, and Irish instigator Conor McGregor lands in Brazil to demand the spotlight. As the main event fighters train across the hall from each other, former heavyweight champ Junior Dos Santos drops in on Aldo, declaring his countryman the best pound-for-pound fighter on earth, and co-main event combatant Glover Teixeira laughs off any notion of training during fight week. Across the hall, Teixeira’s opponent Phil Davis joins Team Alpha Male for jiu-jitsu work with Urijah Faber. Later Chad Mendes channels Rocky Balboa on a Brazilian beach, and Conor McGregor lands in Rio to make some noise. UFC Embedded is an all-access, behind-the-scenes video blog series focusing on the days leading up to the epic UFC 179: Aldo vs. Mendes 2 fight card, taking placeSaturday, October 25, on Pay-Per-View.