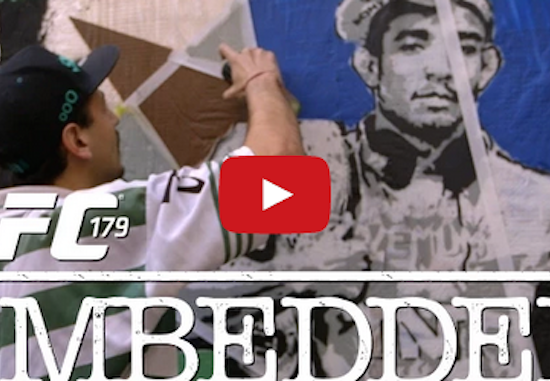 On episode 2 of UFC 179 Embedded, featherweight champion Jose Aldo “Junior” works out alongside former heavyweight champion Junior Dos Santos as his coach predicts an early finish in Saturday’s main event. Challenger Chad Mendes arrives in Rio with his crew including former WEC champion Urijah Faber, and the team has a laugh at the latest episode of Embedded. Light heavyweight Phil Davis checks his weight and tests his wit against site coordinator Burt Watson, while his opponent Glover Teixeira trains to pull off the UFC’s first-ever win by way of odor. UFC Embedded is an all-access, behind-the-scenes video blog series focusing on the days leading up to the epic UFC 179: Aldo vs. Mendes 2 fight card, taking place Saturday, October 25, on Pay-Per-View.