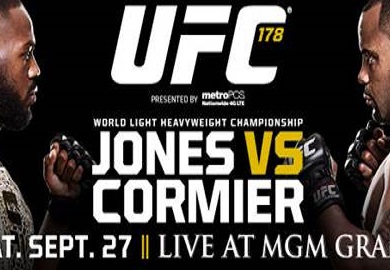 Tickets for UFC 178 were scheduled to go on sale this Friday prior to the scuffle between Jon Jones and Daniel Cormier at UFC’s Ultimate Media Day yesterday. After the brawl, many fans were left to wonder whether the UFC would cancel the card or go on with the event.

It looks like we have our answer, as the UFC has informed us that tickets will go on sale as scheduled this Friday.

The bad blood between Jones (20-1, fighting out of Endicott, N.Y.) and Cormier (15-0, fighting out of San Jose, Calif.) has brewed for months with the two trading heated words in the press. The talk comes to an end in Las Vegas next month in one of the most anticipated title fights of the year!

In addition, Irish phenom Conor McGregor (15-2, fighting out of Dublin, Ireland) will meet sixth-ranked Dustin Poirier (16-3, fighting out of Coconut Creek, Fla.) in a featherweight showdown that could have major title implications. McGregor is coming off a first-round knockout of Diego Brandao and will be looking to stay unbeaten inside the Octagon® against Poirier, one of the most devastating finishers in the division who has won nine of his last eleven.

Also, undefeated No. 1-ranked women’s bantamweight contender Cat Zingano (8-0, fighting out of Broomfield, Colo.) will clash with Brazilian knockout artist and No. 8-ranked Amanda Nunes (9-3, fighting out of Miami, Fla.) in a bout that could determine the next challenger for Ronda Rousey’s crown.

· Former UFC bantamweight champion, Dominick Cruz (19-1, fighting out of San Diego, Calif.) makes his long awaited return to the Octagon as he meets No. 5-ranked Takeya Mizugaki (20-7-2, fighting out of Kanagawa, Japan).

Get your VIP package today! The UFC VIP Experience packages together your tickets with behind-the-scenes access to the official weigh-ins, backstage tours, meet and greet and autograph signings with top UFC stars, Q&A sessions, and photo opportunities, access to an in-arena VIP party room, a chance to hold the championship belt inside the Octagon® and more!

UFC Fight Club® members will have the opportunity to purchase tickets to this event Wednesday, August 6 at 10 a.m. PT via the website www.ufcfightclub.com. A special Internet ticket pre-sale will be available to UFC newsletter subscribers Thursday, August 7 starting at 10 a.m. PT. To access this presale, users must register for the UFC newsletter through UFC.com.