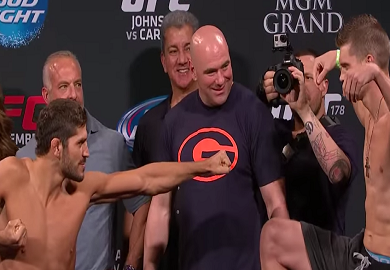 Stephen Thompson’s performance inside the octagon tonight was masterful.

Thompson’s stance is heavily influenced by point-karate which means that his hands are often kept down and his lead leg is far ahead of his rear. Cote tried to take away the explosiveness of Thompson’s attack by concentrating his attack on the lead leg of Thompson. Thompson absorbed more than fifteen leg kicks in the first round alone.

Taking the leg kicks into consideration, Thompson did not CHANGE his style, but rather adapted to Cote’s strategy. In the second round, Thompson landed his jab or snap sidekick and hopped backwards, dodging Cote’s counter attacks. Cote showed frustration toward the end of the round and he begged Thompson to come within striking distance.

Thompson locked the victory up with a knockdown caused by a right cross. Thompson, again, fought intelligently and did not over-dedicate to the finish. Cote was let back up and never regained full composure as he seemed groggy for the remainder of the fight.

Stephen Thompson was announced the victor after fifteen minutes of action.