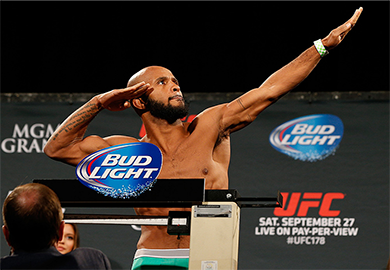 After finishing tonight’s championship bout with a submission, it is safe to say Deleterious Johnson is the most well-rounded champion the Ultimate Fighting Championship has.

Cariaso saw almost no success in tonight’s fight as he was completely outclassed by the champion. Johnson took Cariaso down in the second round and transitioned with ease. Rogan made a point that one of the reasons Johnson is such a good fighter is that he listens and executes exactly what his corner wants him to. When they told him to transition, he jumped right over to side control and trapped Cariaso in a crucifix.

Johnson fired off shots there until Cariaso wiggled out and walked right into a straight armbar attempt. Johnson abandoned the armbar and locked in a kimura. You could see in Cariaso’s face that he was in agonizing pain and it was only a matter of time before he submitted.

Demetrious Johnson def. Chris Cariaso by way of Submission (Kimura) 2:29 of Round 2