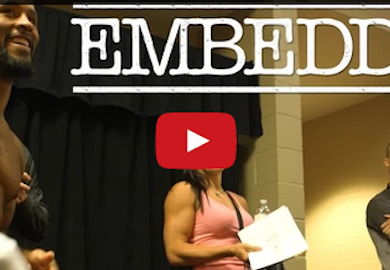 On episode #3 of UFC 178 Embedded, the fighters arrive in Vegas and assemble at the MGM Grand. The close quarters create tension when opponents Conor McGregor and Dustin Poirier cross paths and exchange words in the lobby. Donald “Cowboy” Cerrone discusses his legacy with the media, while UFC champ Demetrious Johnson, challenger Chris Cariaso and women’s bantamweight Cat Zingano talk about weighty issues with site coordinator Burt Watson. UFC Embedded is an all-access, behind-the-scenes video blog series focusing on the days leading up to the UFC 178 Pay-Per-View event headlined by the flyweight title bout between Demetrious Johnson and Chris Cariaso on Saturday, September 27th.