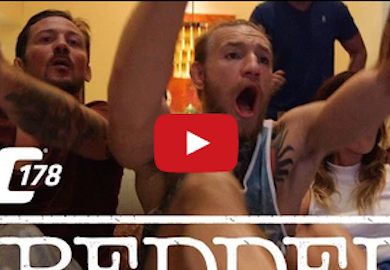 On episode 1 of UFC 178 Embedded, the Notorious Conor McGregor makes himself at home in Las Vegas, joining UFC president Dana White to watch Mark Hunt’s KO of Roy Nelson live from Tokyo. While the Irishman enjoys the perks of his early Vegas arrival, his UFC 178 opponent, 5th ranked featherweight Dustin Poirier, wraps up a successful training camp in South Florida, confident that he’s the man to derail McGregor’s hype train. UFC Embedded is an all-access, behind-the-scenes video blog series focusing on the days leading up to the epic UFC 178 fight card, Saturday, September 27, on Pay-Per-View.