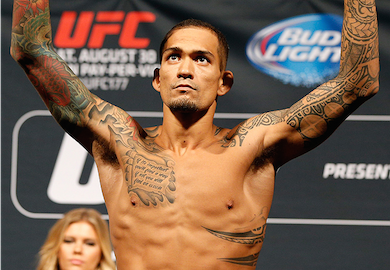 Yancy Medeiros’ submission skills have improved greatly since training at Gracie Academy with the Diaz Brothers. Medeiros was able to lock in a rare reverse guillotine choke to put Damon Jackson away in the second round.

Medeiros loosened up and found a nice striking-distance quickly in the first round. He cut off Jackson’s clinch attempts with quick, sleek uppercuts and jabs and you could see frustration beginning to show on Jackson’s end.

In the second round, Jackson pushed Medeiros up against the fence and worked for a takedown but left his neck exposed. Medeiros wrapped his arm around the neck of Jackson and Jackson tried to turn away, but Medeiros kept his grip. What resulted from this scramble was a rare submission from Medeiros: a reverse guillotine. Apparently, the pressure was so great that Jackson was forced to tap within seconds of being trapped in the hold.

This was Medeiros’ first victory since 2010.

Yancy Medeiros def. Damon Jackson by way of Submission (Reverse Guillotine) 1:54 of Round 2