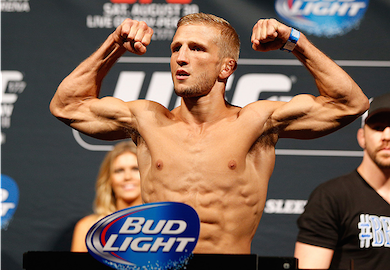 Joe Soto did do a great job tonight and showed rays of brilliance in his performance, but it was TJ Dillashaw who outworked and outperformed the challenger tonight.

Soto landed his fair share of punches throughout the fight but Dillashaw was in another league. For every one shot Soto landed, Dillashaw fired back with three or four more. Soto seemed one dimensional, working to land a big shot and wobble the champion. Dillashaw was elite in his striking by changing levels and approaching from every angle possible.

There were a few moments in the bout where Soto landed a big shot, but Dillashaw never let him follow up with anything threatening. Soto’s defense was superb as he kept his hands up the entire bout, displaying a great gas tank with only twenty-three hours notice for the championship fight.

Those in attendance showed their support for the brave Soto at the start of the fifth round, showing their appreciation for him saving the card. The support of the crowd was not enough for Soto to pull off the Cinderella Story victory; TJ Dillashaw is just too damn good to let that happen.

Dillashaw continued to head-hunt for a knockout victory and found it in the fifth and final round. He backed Soto up against the fence and blasted him with a headkick. Soto lost control of his body but remained standing. Dillashaw followed up with a left cross and Soto crumbled to the mat. The referee called off the fight before any additional punishment could be dished out.