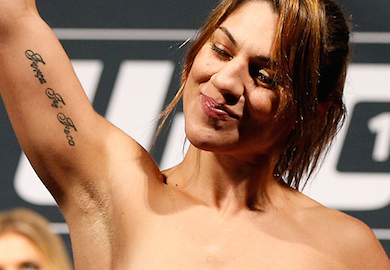 Bethe Correia’s kickboxing is among the best in the division. She showcased her skills tonight against women’s MMA pioneer Shayna Baszler and finished her in the second round.

A product of Josh Barnett’s catch-wrestling training, Baszler was looking to tie Correia up the entire first round a trap her in a submission. She almost did early on in the first round with an armbar, but Correia displayed great submission defense and slid her arm out of the backdoor. From that point on, Correia defended almost every takedown in the round up until the last thirty seconds.

In between rounds, Correia was instructed by her corner not to brawl with Baszler, but rather pick her apart and finish the fight. Correia avoided all of Baszler’s clinch attempts and landed body shot after body shot. Eventually, Baszler’s back was up against the fence and she was not defending intelligently. Correia sapped the energy from Baszler by landing body shots then proceeded to land unblocked elbows and punches to her opponent’s face. Big John eventually saw enough punishment and called the fight, rewarding Correia with a TKO win.

Bethe Correia def. Shayna Baszler by way of TKO (Punches) 1:56 of Round 2