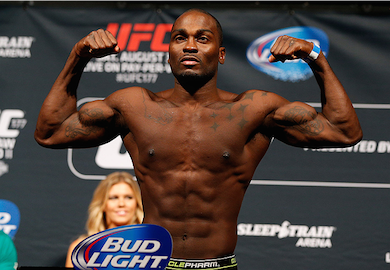 Derek Brunson was able to get out of the path of Lorenz Larkin’s fists as he wrestled his way to a unanimous decision victory.

Brunson and Larkin closed out the preliminary portion of “UFC 177: Dillashaw vs. Soto” with a slow-paced middleweight bout. Brunson utilized his elite grappling skills to shut down Larkin’s striking game much to the disapproval of those in attendance.

Brunson almost put Larkin away in the first round when he wrapped him up with a rear naked choke, but Brunson’s back was up against the fence and he had no room to crank the hold.

Other than that exchange, Brunson seemed contempt with pummeling Larkin and not going for submissions. Brunson did just enough to not get stood up which led to the crowd showering him with a chorus of “boo”s multiple times.

There were moments when Larkin got pack to his feet, but he would try to regain momentum too fast instead of slowly getting back in the game. He would overcharge his combinations which allowed Brunson to cut him off with a takedown.

It was no surprise to see Brunson’s hand raised after the third round expired.