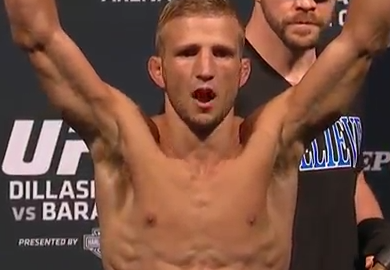 Fight of the Night: Diego Ferreira vs. Ramsey Nijem
Ferreira and Nijem kept the excitement flowing with their ‘FOTN’ performance tonight at “UFC 177: Dillashaw vs. Soto”. Despite finding success in the first round with his striking, Nijem showed overcommitment to his combinations and got caught with a counter shot from Ferreira. Ferreira landed a left hook on the button and Nijem lost control of his body. Nijem fell to the canvas and Ferreira got in a couple shots for good measure before the referee called the bout off.

Carlos Diego Ferreira def. Ramsey Nijem by way of TKO (Punches) 1:53 of Round 2

Performance of the Night: Yancy Medeiros
Hawaii’s own Yancy Medeiros put on one of the most impressive performance in the octagon tonight against Damon Jackson. Their bout kicked off the pay-per-view portion of the card and Medeiros was able to submit Jackson with an extremely rare hold: the Reverse Guillotine. Jackson was working for a takedown but left his neck exposed which Medeiros latched on to. Jackson tried to slip out of his grip, but only aided Medeiros in transitioning to a modified version of the hold he was originally working for! They dropped to the ground and the pressure was so great that Jackson was forced to submit immediately.

Yancy Medeiros def. Damon Jackson by way of Submission (Reverse Guillotine) 1:54 of Round 2

Performance of the Night: TJ Dillashaw

Joe Soto came to fight tonight, but there was no way he was going to finish the version of TJ Dillashaw that showed up tonight. Dillashaw was crisp, fast and fluid in his approach of offense. For every shot that Soto landed, Dillashaw would fire back with three or four more. Whoever challenges Dillashaw for the UFC Bantamweight Championship next is going to have a tough fight ahead of them.