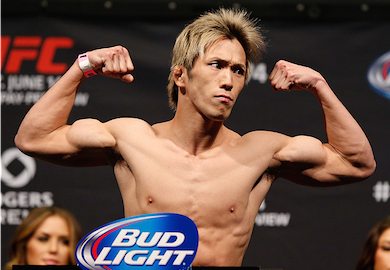 Michinori Tanaka is just one of the many judokas making their presence known in the Ultimate Fighting Championship. The likes of Hector Lombard and Ronda Rousey are drawing these students of judo to the octagon and when elite, their fights are extremely one sided.

Roland Delorme could not figure out Michinori Tanaka’s game at all throughout their fifteen minute bout. Tanaka hopped around from side to side, much like Clay Guida would, and forced Delorme to chase him around. Once Tanaka had Delorme where he wanted him, he would clinch and throw him to the ground.

While on the mat, Tanaka smothered him and executed some brutal ground and pound. Delorme seemed content with being on his back, waiting for a submission to present itself but Tanaka was not giving him anything to work with.

It was clear who the winner was and only the judges from New Mexico could mess this one up. Lucky for Tanaka, they are in Vancouver and the right man won.