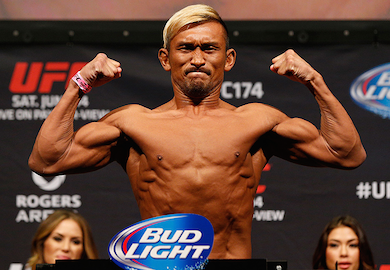 Kiichi Kunimoto and Daniel Sarafian headlined the preliminary portion of “UFC 174” which aired on FX. Kunimoto made quick work of his opponent tonight, gaining his sixth MMA victory in a row.

After a short scramble, Kunimoto got the back of Sarafian and it was obvious he was in trouble right away. Kunimoto locked the hooks in and dove for the neck. Sarafian did a decent job in fighting off the choke, forcing Kunimoto to re-grip his choke multiple times. After several attempts, Kunimoto finally locked it in and cranked hard. Sarafian was trapped and had no other choice but to tap out.

Kunimoto stated that he would like to fight in Japan for the UFC in September.

Kiichi Kunimoto def. Daniel Sarafian by way of Submission (RNC) 2:52 of Round 1