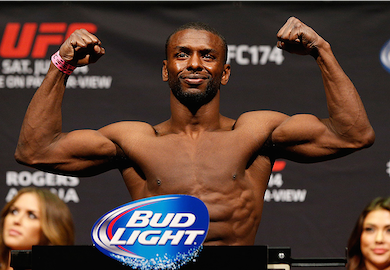 Unraked Yves Jabouin made his presence known tonight in his performance against #8 Mike Easton. This was the second bout of the preliminary portion of “UFC 174” and aired on FX.

After suffering three losses in a row, Easton wanted to make a statement with a knockout win and prove that he belongs in the octagon. Easton walked into this fight confident that he would make quick work of Jabouin. It seemed tonight that he was fighting with emotion, rather than strategy and that cost him a lot of momentum.

Yves Jabouin fought with strategy, picking apart Easton with jabs and taking him down with ease when he needed to. Even though Jabouin did not do much while on the ground, it was still one sided and did not look good for Easton in the eyes of the judges.

In between the second and third rounds, Easton’s corner informed him that he needed to finish the fight in order to win it. Jabouin knew he had the win in the bag if the fight went to the judges’ decision, so he opted to take the fight to the ground a minute into the round. Easton gained top control with two minutes remaining but he was simply too exhausted to work for a submission.