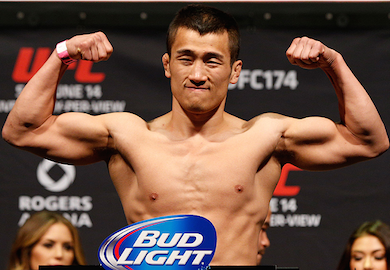 Tae Hyun Bang and Kajan Johnson kicked off the preliminary portion of the card on FX with an exciting lightweight bout that ended in a brutal knockout.

Kajan Johnson was fighting well while standing, but he often left his left hand hanging low which left him susceptible to Bang’s right hooks. This was a recipe that would ultimately end the fight for Johnson, but he still put on a hell of a fight. His inability to raise his left hand caused him to get dropped early on in the first round, but Johnson quickly recovered and slowly shifted momentum his way.

Bang was starting to get tired and that made it easier for Johnson to land his takedowns. Bang’s gas tank was quickly draining and his strikes were so wild you could see them coming from a mile away. However, the fact that he was throwing from his hip so often meant that each right hand packed a KO blow.

In a fight that saw very little strikes thrown to the body, Johnson tried to further drain Bang’s gas tank with a blow to the body. Johnson’s body kick was caught and Bang countered with a dynamite right hand. Johnson’s eyes rolled into the back of his head and Bang fell on top of him. Before he had time to follow up with strikes, the referee called the fight and pulled Bang off of Johnson.