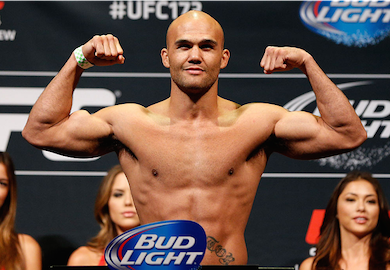 Robbie Lawler proved to the world why he is ranked number one in the welterweight division.

He cracked Jake Ellenberger with a couple high kicks that sent Ellenberger stumbling back a few steps. Even though Ellenberger blocked them, they still hurt and he went into full defense mode. Ellenberger landed maybe two or three shots in the first round but Lawler landed powerful punch after powerful punch. It wasn’t that Ellenberger didn’t try to land anything, though. He was so far away in defense mode that when he tried to lunge forward for a hook, Lawler could see it coming from a mile away and would just duck back.

Jake Ellenberger started to work a bit more in the second round as he landed a few takedowns, but they never lead to anything. As a matter of fact, every time Lawler got taken down he laughed and got right back to his feet. He changed levels and attacked the body and head which confused Ellenberger a bit.

Ellenberger seemed to be making a comeback at the start of the third round when he swung for the fences. He tagged Lawler and he was hurt. However, Ellenberger injured his hand and stopped throwing powerful shots. He tried to switch to kicks and knees but there was no success in them. Lawler just pressed forward and utilized good octagon control to make sure he would not lose the fight. Lawler pinned him up against the fence and crashed his knee into the face of Ellenberger. Ellenberger fell to the ground and Lawler fired off a few more punches before the referee called it off.

Robbie Lawler def. Jake Ellenberger by way of TKO (Knee and Punches) 3:06 of Round 3