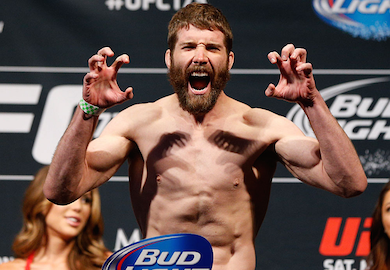 All eyes were on Mitch Clarke and Al Iaquinta as they kicked off the Fox Sports 1 preliminary portion of “UFC 173: Barao vs. Dillashaw”. Fortunately for Mitch Clarke, all of those eyes saw him pull off a huge upset tonight.

In the second round, Al Iaquinta had taken down Mitch Clarke and had his right side pinned up against the fence. Clarke used his feet to walk up the cage and as he transitions to his back, he locks his arms in position for a choke. The transition was so smooth that Al Iaquinta did not even realize he was in danger which let Clarke crank hard on the hold. Within seconds, Iaquinta had been forced to pass out to a beautiful D’Arce Choke.

Mitch Clarke def. Al Iaquinta by way of Submission (D’Arce Choke) :57 of Round 2