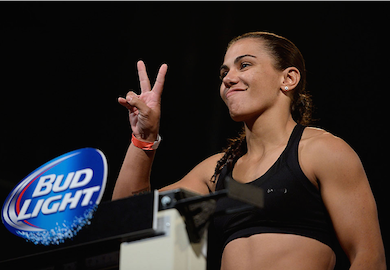 Raquel Pennington looked a bit off tonight in her bout with Jessica Andrade. Pennington did not have much offense in the first round as Andrade dictated where most of the fight went. Pennington looked for a standing guillotine twice while her back was against the fence, but Andrade defended intelligently and escaped danger.

Pennington tried to rack up some offense in the second round, but she was peddling backwards while simply throwing jabs. This allowed Andrade to essentially tee off on her and rock her with hooks and knees to the body. At one point, she pinned Pennington up against the fence and landed seven straight shots.

Pennington finally landed a takedown in the third round with a minute left and she had to finish the fight in order to win. She landed a series of strikes, but Andrade made it back to her feet and once again escaped danger. Jessica Andrade picked up her second win in a row inside the octagon tonight with this decision win.