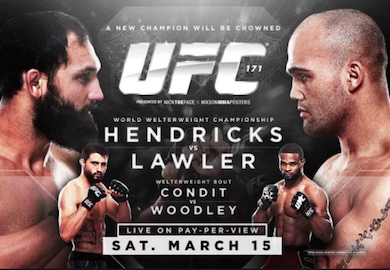 Fight of the Night: Johny Hendricks vs. Robbie Lawler
This was a given. In a night that saw a lot of one-sided decisions, Hendricks and Lawler brawled in the octagon and brought the crowd back to life. Hendricks absorbed a lot of punishment and was cut open in multiple spots on his face, but he fought through the shots and continued to press forward. Lawler put on the best performance of his career and showed that with some condition-training, he will be able to go another five full rounds with heavy power in his fists. In a fight that saw both men look fantastic, Hendricks executed a takedown with a minute left in the fight to lock up the round and the victory.

Performance of the Night: Ovince St. Preux
Ovince St. Preux executed a submission that we have not seen for a very long time: The Von Flue Choke. Nikita Krylov was looking to stop St. Preux from transitioning to full mount by holding his head in a guillotine. Unbeknownst to Krylov and the rest of the arena, OSP was already locking in a choke. The referee was fully aware and stopped the fight when Krylov passed out.

Performance of the Night: Dennis Bermudez
Dennis Bermudez simply overpowered Jimy Hettes en route to his TKO win. He outclassed Hettes throughout the entire fight with striking and grappling and truly put on one of the most impressive, dominant performances inside the octagon. Bermudez laid on the punishment for three rounds straight until Hettes finally succumbed to the strikes in the third round.