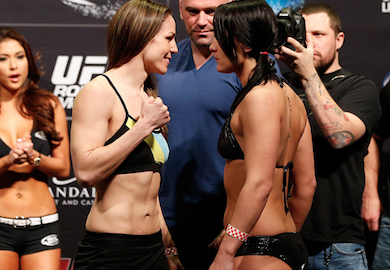 In typical fight-night-fashion, BJPENN.COM will be providing live round-by-round and blow-by-blow action from all the fights on tonight’s UFC 170 fight card.

The first fight kicks off on UFC Fight Pass starting at 4:00 p.m. PT and our preliminary card coverage will conclude at 7:00 p.m. PT.

If you don’t have a UFC Fight Pass account, just tune in here at the sound of the first bell for all the fight action you can handle.

Round 1 -Chavez comes out and throws a kick, but misses. Cedeno counters with a body shot, then a kick to the leg. Another leg kick. Goes for a spinning kick but misses. Cedeno lands with a hard right hand. Chavez answers with a right hand. Both fighters are landing leg kicks. Cedeno goes for a spinning move, but misses and ends up on his back. Chavez takes advantage and gets side control. He looks to mount, ends up on Cedeno’s back. Cedeno gets to his feet at the end of the round. Chavez 10-9

Round 2- Cedeno lands a good left hand. The. Lands a kick to the leg. Chavez answers with a right hand. Cedeno misses another kick and gets taken down. Chavez works from side control, trying to to get to mount. Cedeno eats a knee against the cage. After no action they are reset. Cedeno almost lands a big head kick. Chavez 10-9.

Round 1 – Both fighters meet in the middle of the octagon. After exchanging shots back and forth, Koch lands a beautiful straight left that drops Oliveira. Koch pounces and finishes him with some ground and pound.

Round 1 – Sampo lands a leg kick. Both fighters feeling each other out. Makovsky throws a head kick, mp but misses. A lot of faints. Mako sky shoots and gets the takedown. Sampo has him in rubber guard. Makovsky stands up the. Jumps down into half guard. Sampo gets it to full guard then Makovsky stands up. Tries to land shots from the top. Goes back to full guard. The fighters get to their feet. Sampo throws a few shots but comes up short. They clinch. Then separate. Makovsky lands a jab. Then a leg kick. Makovsky 10-9

Round 2- Makovsky lands a good head kick. Sampo misses leg kick. Makovsky shoots but misses. Sampo lands a right hand. Sampo’s nose is bloody. Makovsky gets the takedown, is in full guard. Goes for half guard. Gets it. Then he stands up. Jumps in from the top and tries to land in side control. Sampo gets to his feet. Leg kick by Makovsky. Good exchange. Makovsky sort of lands a head kick. Sampo is looking to counter. Makovsky gets another takedown. Is in half guard. Sampo is going for an armbar. Round ends. Makovsky 10-9.

Round 3- Sampo comes out firing, Sampo lands with a right hand. Makovsky goes down against the cage. Sampo is working to get to mount. Ends up in full guard. Against the cage. Fighters get to their feet. A lot of punches missing. Makovsky gets the single leg takedown. Makovsky landing punches from half guard. Makovsky 10-9.

Round 2- sterling strikes first, Gibson answers with a leg kick. Gibson telling sterling to bring it. Gibson grabs Sterling’s kick, lands a few punches. Now Gibson has sterling against the cage. Works to Sterling’s back, then back against the cage. Gibson gets the trip and looks immediately for a guillotine. Sterling escapes, is on bottom. Gibson working hard to keep sterling down. Gets Sterling’s back. Sterling stands up and reverses Gibson. Gibson then reverses, then sterling reverses. Fighters break free. Sterling with a leg kick. Gibson gets another trip, goes for the back again. Has sterling against the cage, standing up. Sterling reverses and gies for a takedown. Gibson locks in a guillotine, it looks tight but sterling survives the round. Gibson 10-9.

Round 1 – Davis lands a leg kick. fighters clinch, Eye pushes Davis against the cage. fighters break apart. Davis lands a jab, leg kick combo. Again, Eye takes Davis against the cage. after no action, ref breaks them up. Davis with another leg kick. Fighters clinch, eyes lands a few punches, then they break apart. after a few punches. they clinch again. Now, Davis has Eye against the cage. Davis is landing good knees to the legs and body of Eye. Eye gets free and moves to the center of the octagon. Eye lands a good leg kick. Davis shoots under and gets the take down. gets to side control, then half guard. Davis 10-9.

Round 3- Davis lands a crisp punch kick combo. Davis throws a kick, it gets caught but eye lets it go. Davis comes in to throw a combo, Eye swings for the fences with a few punches. Davis lands a few more kicks to the body and legs. Eye lands a right and left. Eye is looking to counter with a right hand. Each fighter exchanges. fighters clinch, both fighters throw big punches then break apart. Eye keeps catching the kicks, but lets them go. Eye lands two leg kicks in a row. Eye lands a good jab. At the 15 second mark both fighters start to pour on the strikes. close round, maybe Eye 10-9.