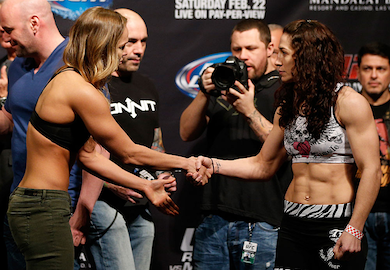 In typical fight-night-fashion, BJPENN.COM will be providing live round-by-round and blow-by-blow action from all the fights on tonight’s UFC 170 fight card.

The first main card fight kicks off on pay-per-view starting at 7:00 p.m. PT and our main card coverage will conclude at approximately 10:00 p.m. PT when the main event is over.

If you don’t have tickets or can’t make the pay-per-view, just tune in here at the sound of the first bell for all the fight action you can handle.

Round 2- Maia looks for a takedown. Macdonald keeps throwing a straight front kick. Maia again shoots, doesn’t get it. Maia lands a hard left. Maia shoots again, Macdonald doing a good job sprawling. Maia again for a takedown, again stuffed, and then again. Maia with a body kick. Macdonald lands a good jab. Macdonald starting to find a rhythm on his feet. Maia’s face is bloody now. Maia looks wobbly, might just be how he is standing. Macdonald really landing with his hands. Maia swings a huge right hand, misses. Maia shoots again, stuffed. Macdonald continues to land the jab. Maia grabs a kick from Macdonald, tries to get the takedown, fails. Macdonald 10-9.

Round 3- Macdonald seems to be the fresher fighter. Throws two punches, then a body kick. Straight right from Macdonald. Macdonald is locked in and just keeps landing one two combos. Maia looks beat up. Maia gets him against the cage, goes for a single leg, switches to a double leg and gets Macdonald down. Maia is working from full guard. Only 2 minutes left. Macdonald keeping Maia in butterfly guard. fighters get to their feet. Macdonald goes right back to the jab. another Maia takedown stuffed. Then another. Front kick from Macdonald. Another sprawl. Maia starting to swing wildly. another stuff, Macdonald goes for a huge punch, misses. Macdonald ends the fight with a flurry of punches. 10-9 Macdonald.

Round 1 – McMann is landing strong punches. Rousey gets her agasint the cage. lands a few knees to the body. Rousey going for a throw, Mcmann fights it off. Rousey drops her with a knee to the body. Ref stops the fight.

Result- Rousey wins via Tko (Knee to body) at 1:06 in the first round