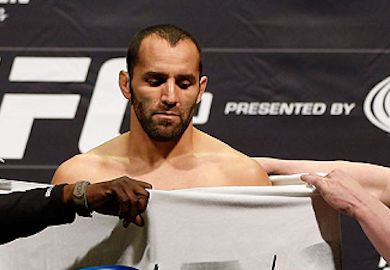 Ernest Chavez and Yosdenis Cedeno had the honors of kicking off the UFC Fight Pass Preliminary bouts tonight. This was the octagon debut for both Chavez and Cedeno.

Yosdenis Cedeno spent the majority of the first round landing strikes at will due to unique, fast foot movement. Chavez was never able to find a comfortable striking distance due to the movement, so Cedeno shone for the first three minutes of the bout. Chavez eventually found out that once he was able to land a takedown he had full control of where the action would go on the ground. This was the story of the second round as well; Cedeno did well in the standing game while Chavez shone on the ground.

By the time the third round came, Yosdenis Cedeno’s gas tank seemed to be fading. It was a mixture of his fast foot-movement in the first round and the constant bearing of Chavez’ weight resting on him while on the ground that caused him to slow down significantly. This allowed Chavez to control the octagon and force Cedeno to continue circling to his left, giving him an advantage in the eyes of the judges.