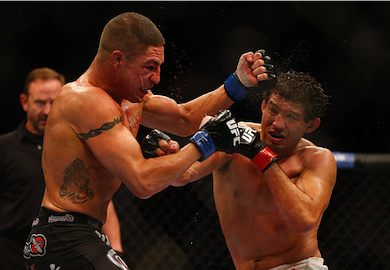 The idea of a bout between lightweights Gilbert Melendez and Khabib Nurmagomedov for UFC 170 has officially been scrapped.

Gilbert Melendez was the first to throw out the challenge after his victory against Diego Sanchez. Not only did Nurmagomedov agree, but he kept lobbying for the fight days after Melendez first mentioned it.

Reports started leaking from Russian news outlets that the fight was all but official and they were scheduled to duke it out in the octagon. The UFC President quickly refuted the reports, stating the bout had not been confirmed yet.

The poster for UFC 170 was leaked during the UFC 168 Post Fight Press Conference and it even featured images of Melendez and Nurmagomedov, insinuating they were going to fight each other.

With the poster leak, it was essentially confirmed by the UFC that the two would meet in the octagon at UFC 170 in February. However, Dana White got in touch with Fox Sports’ Mike Chiappetta and has officially laid the rumors to rest: “Not happening”.

With Gilbert Melendez ranked number-two and Khabib Nurmagomedov ranked number-seven, Joe Silva could be exploring other opportunities for them closer to their spots in the lightweight rankings. Who would you like to see them face next? Are you disappointed the fight was scrapped? Share your thoughts in the comments below!