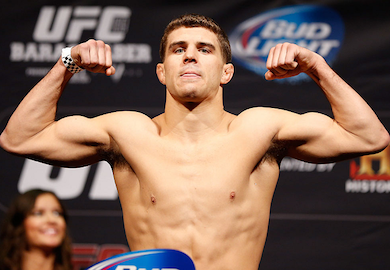 Al Iaquinta was riding a two fight win streak walking into the octagon tonight, but Kevin Lee was looking to extend his impressive seven win streak.

At the start of the fight, you could see Al Iaquinta was looking to land a big shot. His stance looked stiff and his punch was locked and loaded, then he dropped Lee with a straight left in the center of the octagon. Lee was quick to recover but he ate several shots as he was trying to gain his composure. Iaquinta almost locked up an impressive heel hook submission, but Lee had control of his hands and cut off the submission before he could secure if 100%. Things were looking bad for Lee early on, but he was able to escape the first round and make it back to his corner.

Lee started off the second round early by landing a takedown and securing back position. He wrapped his legs around the waist of Iaquinta and started to wrench on the rear naked choke, but the experienced Iaquinta turned toward the choke and escaped. Lee maintained control of back control for the rest of the round and they would walk into the third round with one-a-piece.

Kevin Lee tried to lockup a victory with takedowns, but Iaquinta would cut his attempts off with two-punch combinations that often landed. Iaquinta had great movement for someone who was fighting with his mouth open while bleeding out of his nose, and utilized it to dodge Lee’s punches and land his own.

When all was said and done, it was Al Iaquinta who would walk away with the victory. He has not lost a fight inside the octagon since June 2012. Who would you like to see Al Iaquinta fight next? Share your thoughts in the comment section below!