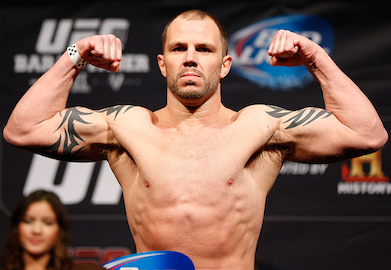 Both Tom Watson and Nick Catone were looking to rebound from losses in their last octagon outings.

Nick Catone wanted to land a big shot early, but Tom Watson kept him at bay with leg kicks. This was a stalemate that would keep only patient fans entertained, and those in attendance in New Jersey voiced their disapproval. The only time the fight left the feet in round one was when Catone landed two easy takedowns.

The stalemate continued throughout the remainder of the fight, but Catone did start to land his short right with more success. He wasn’t gathering enough momentum to knock Watson out with the shots, but it was doing enough damage to force Watson to reset his stance.

We saw a bit of a change up in the third round in who was controlling where the fight went. Tom Watson finally took the center of the octagon and backed Catone against the fence multiple times. Catone ate so many leg kicks that the back of his leg was bruised and badly damaged— he even tried switching stances halfway through round three. When he was having no success landing strikes, he switched back. Watson was doing well standing up, but Catone took him down twice in a row in the third which could have locked up the judges’ decision.

After the second takedown he transitioned to the back of Watson and tried to lock in a rear naked choke, but he couldn’t lock anything in. Eventually he abandoned the submission attempt and rode the advantageous positioning to the end of the third.