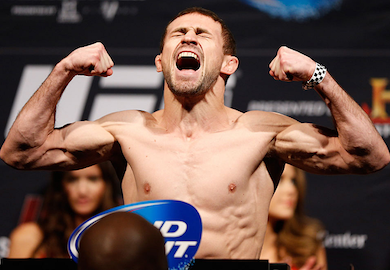 Following a fight that likely earned ‘knockout of the night’ honors is never an easy task.

The beginning of the first round saw Bagautinov take the fight to the ground only to almost walk into a heel hook. Lineker was torquing full-force and it looked like Bagautinov was seconds away from being forced to submit, but he put Lineker in a leg lock of his own!

Eventually, they made it back to their feet and reset the action in the center of the octagon. Ali Bagautinov and John Lineker had a strategic contest that saw them even at the start of the third with one round a piece.

He wasn’t wrong. The judges awarded him the decision win. Bagautinov is now 3-0 inside the octagon.