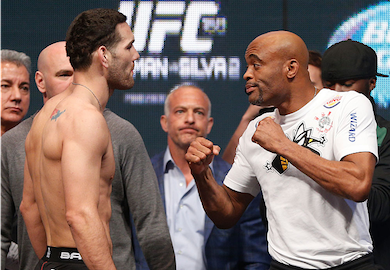 Tonight on pay-per-view the UFC brings us their annual year-end blockbuster with ‘UFC 168: Weidman vs. Silva II’.

In typical fashion, BJPENN.COM will be bringing fight fans live and up-to-the-minute updates from the evenings action.

If you cannot make the pay-per-view broadcast just follow along with us here for your blow-by-blow and round-by-round updates.

Round 1 – Poirier comes out and lands some nice leg kicks. Poitier looks light on his feet. He continues to land leg kicks. Brandao is looking to counter. Poirier lands a hard right hand. Fighter clinch and briefly hit the mat, but get right back to their feet. Brandao shoots and gets the takedown. But Poirier gets right back up. Brandao looks tired already, Poirier is laying it on strong. Brandao goes to the mat and Poirier continues to land big punches. The fight is stopped.

Miller wins via submission (armbar) in the second round

Round 1 – no touching gloves. Barnett looks for the clinch. Has Browne agains the fence. Browne landed a good knee as Barnett pushed him against the cage. Barnett goes to his knees, Browne starts landing elbows to Barnett, similar to the way he finished Gabriel Gonzaga. Barnett is out, just like the Gonzaga fight.

Round 1 – Intense stare down. Tate comes out firing with punches. Rousey gets the takedown. Tate makes her way up. Rousey has her up against the cage. Tate throws a kick and gets taken down. Tate goes for a triangle and gets picked up and slammed. Tate gets a takedown. Rousey looking for a triangle. Rousey is landing punches and elbows. Tate is surviving, Rousey still has triangle locked up. Tate gets out. Fighters are standing. Tate is landing hard punches, Rousey gets the judo throw. Rousey goes from the back and tries to get armbar, gets reversed. Rousey gets another throw. She lets Tate stand up. They clinch again, against the cage. Round ends. Tate is bloodied up. Rousey 10-9

Round 2- Rousey lands a good punch. Rousey trips Tate. Let’s Tate back up and gets another throw. Rousey lets her up again. Rousey looks for the leg and gets the takedown. Rousey is in side control. Rousey has her agains the cage, Tate gets to her feet. Rousey has her clinched against the cage. Rousey is landing short punches in the clinch. The action slows, then Rousey gets another judo throw right into side control. Tate uses her legs to try and reverse Rousey. Rousey gets loose and goes for mount, gets it. Rousey goes for armbar, almost gets it. Tate gets out but is still on bottom. Rousey has a backwards triangle locked up. Rousey is keeping her in this position. Round ends in that position. Rousey 10-9

Round 3- Rousey forces Tate against the cage. They are clinched. Rousey looks for another throw. Tate sort of throws her body down. They roll and Rousey remains on top, Rousey goes for and gets the armbar. Fight over.

Rousey wins via submission (armbar) at (:58) of the third round.

Round 1 – Fighters touch gloves. Both men feeling each other out. Silva throws front kick to body. Weird man goes to takedown. Gets Silva agin as the cage. Weismann looking for the takedown. Silva gets the tai clinch. They separate, Silva gets dropped, Weidman is standing over him throwing punches. Weidman goes into Silvas guard. Silva has recovered. Weidman is in dull guard throwing little punches, then starts landing stronger punches. Silva is still on his back, Weidman is picking away at him. Weidman keeps craning Silva’s neck up. Silva has yet to look for a sweep or submission. Weidman postures up and lands a big elbow. Weidman stands up, Silva stays on his back. Round ends. Weidman 10-9

Round 2- silva chooses not to touch gloves this round. Silva throws inside leg kick. Not a lot of dancing from Silva. Silva throws a front kick, misses. Silva throws a leg kick and immediately drops back to the mat in pain. Fight is over. Silva’s leg is broken.

Weidman wins via TKO in round two. (Due to the fact that Silva broke is leg)