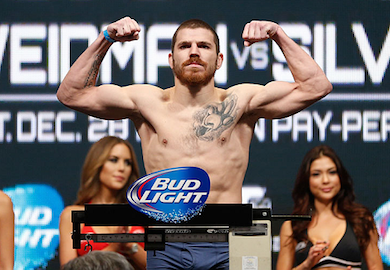 Fabricio Camoes brought the Brazilian-heavy crowd to life after a successful start to the first round.

Camoes got the better of Jim Miller while standing after repeatedly catching him with clean significant shots from a distance. Camoes controlled where the fight went and whenever Miller was backed against the cage, Miller would eat a couple shots before getting back to the middle of the octagon. Miller found success after landing a takedown, but Camoes was able to pop right back up. It wasn’t long before Miller was on bottom of Camoes and it looked like Camoes was in full control of the fight.

Miller worked his way to an advantageous position and worked his way into an armbar. He got the shin across the face and turned the right way and locked it up. Camoes let go of his other hand and that was all she wrote; he tapped out before Miller had the chance to torque.

Fabricio Camoes defeated Jim Miller by way of Submission (Armbar) 3:42 of Round 1