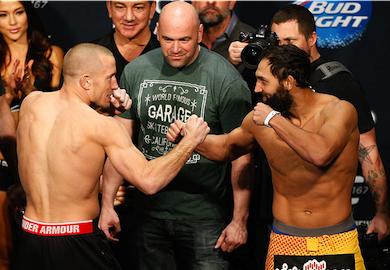 The ‘UFC 167: GSP vs. Hendricks’ pay-per-view event goes down tonight from the MGM Grand Garden Arena in Las Vegas, Nevada.

For those who missed or cannot make the live main card, please join us here at BJPENN.COM for all your round-by-round and blow-by-blow action.

Round 2 – Elliot is a lot more bouncy at the start of this round. We’re also seeing more head movement from him. Bagautinov hits a nice leg kick. Elliot lands a knee, but Bagautinov catches him and goes for a takedown. Elliot catches him with a guillotine but Bagautinov literally throws him off and he’s out of danger. Elliot lands a takedown and is now on top in Bagautinov’s guard. Elliot is constantly working and throwing strikes. Bagautinov goes for an armbar on bottom but Elliot steps over him and they’re back to their feet. Elliot is throwing jabs and a couple of them are landing, but not doing much. Elliot hits an inside leg kick. Bagautinov just misses a right hook. Right cross from Bagautinov. The round ends with Elliot lunging for a combination. 10-9 Bagautinov

Round 1 – Woodley lands a big right hand. Woodley follows up with a big uppercut and Koscheck is hurt. He moves down to avoid getting hit again and shoots for a takedown. Woodley is pressed against the cage now. The referee separates them and resets the action in the middle of the octagon. Woddley connects with a leg kick and a right hand, but Koscheck cracks Woodley with an overhand right of his own that sends Woodley back. Woodley is wobbly, but Koscheck doesn’t follow up. Woodley drops Koscheck with another overhand right. Woodley jumps on Koscheck and Koscheck eats punches, but tries to get away from them so the referee doesn’t stop the fight. Koscheck holds on for dear life and is hoping for the referee to stand them up, now. Woodley cannot advance so the referee stands them up. Koscheck’s eye is swollen. Koscheck is looking to engage but Woodley is backing up. Woodley catches Koscheck off guard and pops him with a HUGE right hook. Koscheck gets hit with another right before he hits the ground. Knockout win for Woodley.

Tyron Woodley defeated Josh Koscheck by way of KO (Punches) 4:38 of Round 1

Round 2 – MacDonald shoots for a takedown but Lawler pops him a couple times which causes MacDonald to abandon ship. They’re back in the middle of the octagon. Lawler is looking to set up a head kick by locking up one of MacDonald’s hands. MacDonald lands a nice kick to the body. Head kick from MacDonald. Leg kick from MacDonald. Lawler answers with a nice right hook, followed up by another unchecked leg kick. Again with the leg kick. MacDonald connects with a straight kick to the head. MacDonald shoots again with two minutes left and succeeds. He waits for a bit before making a move, and has Lawler’s head locked up but he’s not in danger at all. MacDonald steps to the side and is now in Lawler’s guard. Lawler is landing solid shots on the bottom. MacDonald postures up and lands four nice elbows. MacDonald misses a slicing elbow as the round ends. 10-9 MacDonald

Round 3 – Lawler comes out with guns blazing and connects with a shot that may have MacDonald hurt. Lawler attempted to land a knee to the head but this allowed MacDonald to take him down again. MacDonald is looking to connect with some elbows and establish ground and pound. The referee stands them back up, which is exactly what Lawler wants. MacDonald lands an overhand left. MacDonald attempts a takedown and Lawler rolls through; Lawler has top position! Lawler makes him stand back up. Lawler tags him with a hook as he ate a short elbow. Accidental eye poke causes a pause in action. MacDonald is okay and the fight continues. MacDonald gets dropped with a hook! Lawler jumps on top of him and can’t finish it. He has side control. Lawler lands a big left hand as he transitions back to half guard. MacDonald almost locks in an armbar but Lawler slides out. They’re back standing. MacDonald eats a right hand. MacDonald lands a takedown and is throwing elbows. Lawler is blocking some, but a lot of them are getting through. Horn sounds, what a fight! 10-9 Lawler

Round 1 – Sonnen shoots within the first ten seconds of the fight. Evans defends but still has his back against the cage, Sonnen can drag him down if he wants. Evans spins it around, and Sonnen return the favor. Evans turns it around again and goes for a takedown but Sonnen defends. Rashad with a big right hand. Sonnen tries to answer back but nothing really connects. Rashad has a double and takes him down. Evans postures up and slams his elbow into the head of Sonnen. Sonnen gives up his back. Evans is landing big shots and Sonnen turns back around. Evans is now in full mount. He lands some more shots and ends up on Sonnen’s back. Sonnen eats some more shots and Herb Dean calls it off.

Rashad Evans defeated Chael Sonnen by way of TKO (Strikes) 4:05 of Round 1

Round 1 – Here we go! The UFC Welterweight Title fight is now underway. They meet in the middle of the octagon and St. Pierre hits a jab. St. Pierre ducks a big shot and shoots for a takedown and lands it. St. Pierre almost has a mounted guillotine, but Johny escapes it. Johny is back to his feet and they are now wrestling, jockeying for position. The referee breaks them up and resets the action. Johny anticipates St. Pierre ducking under his shot so he throws an uppercut which connects. While in the clinch, Johny is landing hard punches and elbows. Johny has St. Pierre pressed against the cage and lands two hard knees to the thigh. St. Pierre is sporting a bruise on his face. Johny takes St. Pierre down. Johny hits another shot and St. Pierre is back to his feet. Johny doesn’t want to let go of the takedown attempt but St. Pierre escapes. St. Pierre is cut. Johny lands a hard knee. St. Pierre hits a kick to the inside of Johny’s lead leg. St. Pierre hits a jab. St. Pierre lands a high kick, but the power faded toward the end of the attempt. They’re back in the clinch and exchange knees to the legs and body. Another head kick from GSP. Horn sounds. 10-9 Hendricks

Round 3 – GSP seems to have established his jab and it’s connecting regularly now. Johny hits a quick left hook, then a jab. Johny is starting to slow down. Johny is starting to breathe heavily after he whiffs on punches. St. Pierre tags Johny with a left hook. St. Pierre hits a leg kick then a cross. Johny is losing his ability to dodge these strikes. St. Pierre has hit the body-head combination multiple times in a row, now. He knows Hendricks’ fatigue is setting in. Hendricks shoots for a takedown and it’s easily stuffed. After some work, though, St. Pierre gets taken down. St. Pierre gets back to his feet with ten seconds left in the round and we are moving on to championship rounds. 10-9 St. Pierre