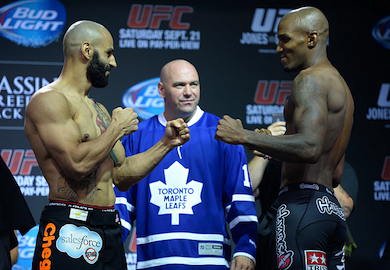 Carmont opened up the fight with a surprising takedown, which caught Philippou off guard. Carmont used his size and momentum to keep Philippou as he worked his way into various potential submission holds. No significent strikes were landed except for those that Carmont landed when Philippou was blocking a rear naked choke from happening. Carmont did a good job early on forcing Philippou to carry his weight, tiring him out in the process.

The second round began with another takedown from Carmont after he ducked under Philippou’s punch. Nothing came of the takedown, however, as Big John stood them up and reset the action. This gave Philippou some hope, but Carmont took him down no more than twenty seconds later.

Philippou walked into the third round knowing he was two down, and under the instruction of his coaches he was told to let his jabs go. Philippou looked to be loosening up a bit while throwing some leg kicks and hooks, but Carmont took him down early in the round. Carmont was preventing Big John from standing it up by throwing punches every couple of seconds.

Carmont had over twelve minutes of top position time.