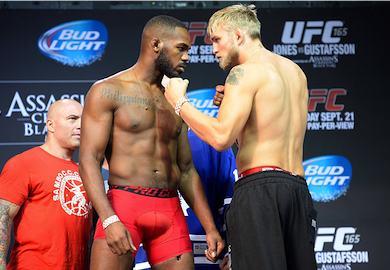 The light-heavyweight title fight serves as the night’s main event and goes down live from Toronto’s Air Canada Centre.

Starting at 7:00 p.m. PT / 10:00 p.m. ET, the night’s main card kicks off with a lightweight bout between Pat Healy and Khabib Nurmagomedov.

BJPENN.COM will be laying out your blow-by-blow and round-by-round results right here in this thread, so if you can’t make the pay-per-view broadcast, tune in here and enjoy the results with us!

Round 1 – Carmont is opening up with various leg and high kicks. He’s putting “umph” into these kicks early. Carmont takes Philippou down forty seconds into the bout. Philippou was never in any danger as he easily went all the way over to the cage to try and wall walk up. Carmont is working to get Philippou’s back; he has one hook it. Carmont is landing some nice lefts as Philippou is covering up, protecting his back. Carmont hooked his chin but Philippou rolls out of it and Carmont is now on top. Carmont transitions around and tries to work his way into various holds, but never locks anything in. Philippou almost locks in a couple armlocks but nothing comes of it. Horn sounds. 10-9 Carmont.

Round 2 – Carmont is throwing repeated jabs, trying to keep Philippou at bay. Philippou goes for a punch but Carmont ducks under and takes him down. Carmont isn’t working for much this time around and Philippou is trying to wall walk up. The issue with that is that whenever Philippou is about to get to his feet, Carmont kicks into gear and attacks him and works for transitions. About forty-five seconds pass before the referee stands them up and resets the action. Philippou ends up on his back soon after, again. Carmont is throwing big punches this time, likely to make it look like he’s staying active. Carmont stands over Philippou, wings some punches and ends up in full mount. Philippou easily gets him back to half guard. End of the round. 10-9 Carmont.

Round 3 – Carmont throws a spinning heel kick just to keep Philippou a few feet back. Philippou is looking to pick up the action with leg kicks and hooks, but he’s taken down with four minutes left in the fight. Carmont is preventing Big John from standing it up by throwing punches every couple of seconds. Philippou locks Carmont’s head in a guillotine position, but he’s in half guard so it won’t lead to much. Carmont is screaming with every punch. Carmont has over ten minutes of top control. Horn sounds. 10-9 Carmont.

Round 1 – Mitrione refused to touch gloves. Schaub grazes Mitrione with a right hand. Schaub then caught him with a left and left himself wide open for a counter which Mitrione just missed. Schaub nails Mitrione with a big right hand. Despite the attacks from Schaub, Mitrione keeps pressing forward. Schaub shoots for a takedown but fails. Mitrione is cut over his left eye. Mitrione connects with a body kick. Mitrione is controlling where the fight is going and just as I type that, Schaub charges with a series of punches and the sequence ends with a takedown from Schaub. Schaub worked his way into a D’Arce Choke and locked it in tight. Mitrione gave the thumbs up as if he was okay and proceeded to pass out. Game over.

Brendan Schaub defeated Matt Mitrione by way of submission (D’Arce Choke) 4:06 of Round 1

Round 1 – No tough of gloves and we are underway. Barao connects with a leg kick. Wineland lunges for a left hook but Barao counters with one of his own; neither connect solidly. Barao’s back is against the fence and Wineland’s hands are grasped around him. The referee breaks them up before Wineland can work a takedown. Barao almost connects with a high kick but it’s caught and pushed aside. They throw leg kicks at the same time and collide. Wineland got out of the way of a spinning high kick. Barao connects with another solid leg kick. Barao ducks under a Wineland punch and missed a hook counter. Barao landed a right hand to the head of Wineland. Barao seemed to have found his distance and is connecting with hooks. Horn sounds. 10-9 Barao.

Round 2 – Wineland comes out quickly and is looking to bounce back from last round. Wineland lands a solid punch to the body of Barao. Wineland proceeds to EAT a spinning back high kick and he falls on his bum. Barao jumps on him and punches his way to victory.

Renan Barao defeated Eddie Wineland by way of KO (Kick and Punches) 0:35 of Round 2

Round 2 – Jones is playing it careful now, keeping his distance. He is keeping Gustafsson at bay with leg kicks. Gustafsson avoids Jones’ takedown attempts twice. Jones fails a third takedown attempt and Gustafsson pops him in the chin with a straight. Jones tries to block a strike, but misses and Gustafsson lands with an overhand left. Jones finally gets a big connection as he lands a head kick. Jones connects with a head kick but it’s caught as he pulls it away and Jones rolls through, wraps his hands around Gustafsson’s body and attempts a takedown. Gustafsson escapes once again. Jones goes high again and connects with his third headkick of the round. Gustafsson still pushes forward and lands an uppercut. Horn sounds. Another VERY close round. Jones 10-9

Round 4 – Jones lands a nice left hook. Gustafsson ducks under a shot an hits a glancing right hook. Jones lands another nice right hand to the chin of Gustafsson. Gustafsson eats a couple left jabs. Gustafsson throws a left to the body and a right to the top, a combination he’s landed throughout the fight. Jones misses a left and Gustafsson counters with a tough one of his own, and then an uppercut. Jones has the clinch and is looking for a takedown. Gustafsson separates once again. Gustafsson’s boxing is helping him out as he lands a jab and a hook. Jones shoots for a takedown out of frustration and fails. Jones connects with a left. Jones goes for another spinning shot but and wobbles Gustafsson. Jones chases him down and connects with a vicious knee and a few punches. Gustafsson is busted open and is waiting for the horn. Round over! 10-9 Jones.

Round 5 – A sign of respect as they touch gloves at the open of Round 5. Gustafsson lands the first big shot of the round with a right straight, but Jones keeps his composure. Jones goes for the inside leg kick and lands it. Gustafsson is in a dirty boxing clinch and hits a couple uppercuts. Jones nails Gustafsson with a short elbow. Jones stuffs a Gustafsson takedown attempt. Jones finally lands a takedown. Gustafsson gets back to his feet seconds after, though. Midway point of the final round. Jones his a big head kick but Gustafsson just eats it. Gustafsson has his hands on his hips… he’s barely keeping it together. Gustafsson throws a spinning elbow of his own, but misses! Gustafsson is running away after every one of Jones’ takedown attempts but he’s still connecting with shots. Jones hits another headkick and we are down to the final minute. Gustafsson absorbs multiple head kicks at the close of the round. Jones connects with a flying knee with seconds left and Gustafsson is still standing! Horn sounds and we have an instant classic on our hands. 10-9 Jones