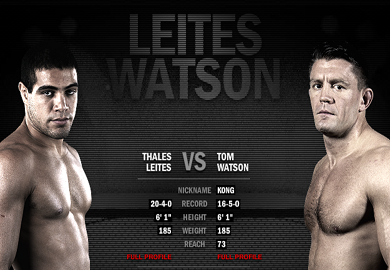 Thales Leites made his return to the Octagon against the always exciting Tom ‘Kong’ Watson in the sophomore fight of the PPV card.

Thales Leites took this one down early and worked his ground game against Watson. Watson was getting battered by big shots on the ground. Watson was able to get up and fight back against a now-tired Leites.

Leites showed that his stand-up could hold up to Watson’s as they stood in the pocket and traded. On the mat it was Leites who again worked around the guard of Watson. Leites looked impressive in his diligence as he worked takedown after takedown in a violent and exhausting fight. Besides a close armbar attempt, the ground work was relatively uneventful.

Both men made a case to the judges on the feet and the round ended in a mutual trading of wide haymakers, as both men were exhausted.

The blood really started to flow in the third as Watson was opened up immediately. Leites outworked a hurt, bloodied, and battered Watson. Leites dominated on the ground and did everything but finish in a great fight that showed the heart and determination of two UFC middleweights.