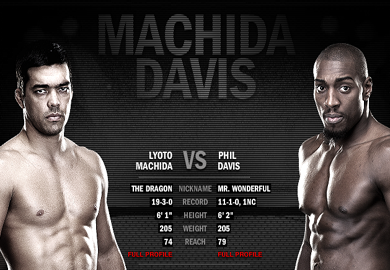 A measured first round saw Machida looking to counter Davis. Machida landed successfully with his usual blinding speed. Davis didn’t look for a takedown for the majority of the round. Whenever Machida would land, even a minor shot, he would berserk on Phil and look to finish. Machida took the stand up in the first although he was taken down late in the round after throwing a punch behind Davis’ head as Davis came forward.

Davis loosened up in the second round on his feet. Davis changed up his strikes and looked to stifle Machida who was looking for a way to get in on Davis. Davis broke up his strikes and lured Machida in, countering him and forcing him to look for new angles, all while Davis was already setting up new combinations after side-stepping out-of-the-way. This round ended the same as the first with Davis on top after a scramble, working the body of Machida.

The third saw Davis coming in to a countering Lyoto Machida. Machida landed the majority of the significant strikes in this one. As for the takedowns of Davis, they didn’t show up in this round. Machida stuffed every attempt with a scurry, never letting his back hit the cage. Machida always seemed to land when it counted while Davis had limited success with his striking, never rocking Machida or even making him think twice about coming forward.

In the end, Machida had a decision taken out from under him after a fight that he seemed to do some notable damage in. Davis, although much improved and aggressive, did little to Machida and could only land two takedowns in a fight where he attempt upwards of ten total. Either way, hopefully Davis can make the most of this opportunity that was gifted to him and continue his climb up the ladder.