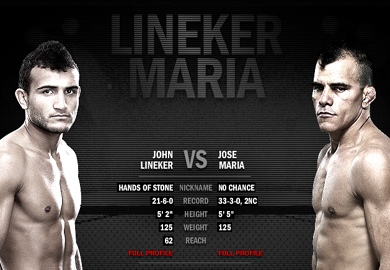 A physical brawl marked the first fight of the PPV as both men looked to finish numerous times and in multiple positions. Lineker was rocked by a spinning-back fist and chased around the Octagon. He survived the first, though and even finished the round on top, landing shots.

In the second, Lineker continued to pressure and load up. Maria looked to counter a charging Lineker but apparently sustained a leg injury, leaving him susceptible to a Lineker attack which finished the fight.

Official Decision: John Lineker defeats Jose Maria at 1:03 of Round 2.