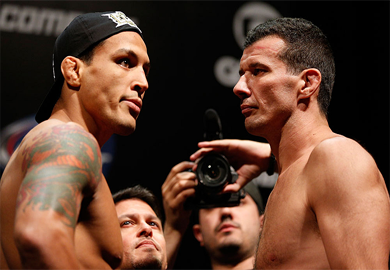 Tonight the UFC returns to Brazilian territory with UFC 163: Aldo vs. Korean Zombie.

The event goes down from Rio de Janeiro’s HSBC Arena and airs live on pay-per-view.

The UFC Preliminary card starts on Facebook.com at 3:30PM PT and shifts to FX after the first two bouts have streamed.

Tune in right here for the preliminary card play-by-play and live results:

VISCARDI ANDRADE (14-5 MMA, 0-0 UFC) VS. BRISTOL MARUNDE (12-8 MMA, 0-1 UFC)
Round 1 – The first fight of the night started at a measured pace. Both sought to cut angles and work their way closer to their opponent. Andrade worked kicks and counters on Marunde. Andrade found success early, countering an approach by Marunde  while lunging forward and dropping him to the mat. Andrade sprawled and worked on a d’arce choke but instead brought the fight back to the feet as Marunde was still badly hurt. Marunde stayed awake but not for long as Andrade leapt on Marunde, forcing Mario Yamasaki to pull him off Marunde.

Official Decision: Viscardi Andrade defeats Bristol Marunde via TKO at 1:36 of Round 1.

FRANCIMAR BARROSO (15-3 MMA, 0-0 UFC) VS. EDNALDO OLIVEIRA (13-1-1 MMA, 0-1 UFC)
Round 1 – The second preliminary bout featured a new fighter to the UFC roster and the light-heavyweight debut of another, respectively, as Francimar Barroso took on Ednaldo Oliveira. Oliveira came out swinging early, missing a hook out of the gate. Oliveira initiated as the aggressor, moving forward and waiting to counter while also working combinations of his own. Barroso started to chop the lanky Oliveira down, landing leg kicks as Oliveira came forward. Barroso had obvious trouble closing the distance early on as he was at a reach disadvantage. Oliveira kept his chin high during exchanges but was still out of reach from the smaller Barroso. Oliveira tried to press the action, calling Barroso in to trade punches. Barroso stayed patient however and continued to throw his kicks to the legs and body of Oliveira. Oliveira pressed forward when the ten second mark sounded off, rushing forward and landing a clean elbow. The round ended in the clinch against the cage.

Round 2 – Barroso walked to meet Oliveira more in this round. Oliveira was able to land a clean counter to Barroso while tripping the leg. Barroso survived the barrage and worked his way back up. Barroso fought for, and gained control in the clinch, only to lose it shortly after. The action was halted for a standing break. Barroso landed early after the break but it didn’t cause Oliveira to hesitate with his approach. Barroso started to string together punches, all that landed clean. Barroso found some takedown defense, landing in the guard of Oliveira. Oliveira got back up to find an elbow meet his chin, the last good shot of the round.

Round 3 – Barroso went after the win at the beginning of this round, sprinting forward and landing a takedown after throwing a big punch. The two hand-fought and grappled one another until a stalemate against the fence resulted. Barroso brought the fight back down to the mat landing another takedown, earning valuable points in the eyes of the judges. More grappling ensued but another break brought back the strikes. Both men looked tired in this round with Oliveira controlling the final seconds of the round against the cage.

JOSH CLOPTON (6-1-1 MMA, 0-1 UFC) VS. RANI YAHYA (18-7 MMA, 3-1 UFC)
Round 1 – The final fight o the preliminary card dropped to the featherweight division. Yahya looked to use diverse strikes and set up a leg pick that was unsuccessful. He was able to engage in the clinch though and worked his way to the mat. Yahya started to pass and attack with submissions, staying very active. Yahya showed his superior grappling pedigree to gain full mount. Yahya was pushed down for a moment but quickly worked his way back to the mount. Yahya ended the round in the mount with full control of Clopton.

Round 2 – Yahya was clearly the fresher fighter in round 2 and landed an early takedown. Yahya again worked around the guard of Clopton with no resistance. Yahya trapped an arm and landed strikes to the head of Clopton. Clopton struggled to manipulate Yahya’s control but to no avail. Yahya worked back to the mount for the third time. Yahya kept an easy base over Clopton and was hardly threatened by any escape attempts. Yahya worked strikes from the mount instead of turning to a submission attempt, and pounded Clopton. Yahya ended another round on top, clearly winning two in a row.

Round 3 – Yayha missed his first takedown attempt of this round. Upon the second, Clopton reversed the takedown and ended up on top, in the guard of the jiu-jitsu ace, Yahya. Clopton worked slowly from the top, landing nothing of significance. He eventually stood up and the stand-up resumed. Clopton landed a knee on the feet and engaged in a clinch. Yahya pulled guard but ended up in the sprawl. Clopton’s grappling seemed to kick in to gear in this round. Yahya attempted a sweep, unsuccessfully. Clopton let Yahya back up. Clopton feinted a lunge over and over. Yahya was able to gain top control once more. and ended the fight on top, seemingly taking the fight from Clopton.

Round 1 – A fast flyweight fight with Ian McCall coming back after a streaky start to his UFC career. McCall worked his wrestling and controlled the first round, showing a level of motivation not previously shown in his UFC bouts. His footwork was superb as he worked laterally and moved around Santos while landing a series of shots whenever he could. McCall took the fight wherever he wanted and  seemed to take an exciting first round.

Round 2 – The second round was more of the same as McCall worked both sharp combinations and steady kicks to weaken Santos. Santos swung for the fences but couldn’t hone in on McCall’s chin. McCall worked takedowns and his footwork in unison and looked to dismantle the offense and defense of Santos alike, building on the success of the first round. McCall again took control in the second and went up big on the score cards.

Round 3 – A brawl ensued as both flyweights, now covered in sweat battled back and forth. THe two exchanged wild punches and never let up. Neither slowed, although both seemed to want to. Santos looked for a takedown of his own but the brawling nature of both men took over. Large shots landed by both men with McCall using his still superior footwork to counter and stay out of range.

NEIL MAGNY (8-1 MMA, 1-0 UFC) VS. SERGIO MORAES (7-2 MMA, 1-1 UFC)
Round 1 – A battle of lanky welterweights was next. Magny was more comfortable on the feet, throwing more than one and changing levels at ease. Moraes saw this flaw in his own game and locked in a beautiful trip takedown. Moraes passed with relative ease, working all the way to the mount position. From the mount, Moraes took a gorgeous triangle from the mount with his legs in the omoplata position. Moraes locked in a tight triangle choke while throing brutal elbows to the head of Magny. Magny was flipped over to his back and submitted with no choice of escape left.

Official Decision: Sergio Moraes defeats Neil Magny via Submission (triangle-choke) at 3:13 of Round 1.

SHEILA GAFF (10-5-1 MMA, 0-1 UFC) VS. AMANDA NUNES (7-3 MMA, 0-0 UFC)
Round 1 – The moment the fight started, both women came out looking to end the fight. Both got hit and Gaff almost locked up a choke when they briefly hit the mat during the scuffle. They got back up but Nunes took the fight back down and gained side control and then subsequently mounted her. Gaff escaped the mount in an unorthodox fashion but was immediately was thrown down. Nunes worked elbows right away and beat Gaff down who was visibly shaken more with each elbow that landed. Referee Herb Dean edged closer and saved a badly damaged Sheila Gaff from further punishment. \

Official Decision: Amanda Nunes defeats Sheila Gaff via TKO at 2:08 of Round 1.

VINNY MAGALHAES (10-6 MMA, 1-3 UFC) VS. ANTHONY PEROSH (13-7 MMA, 3-4 UFC)
Round 1 – The final bout featured a fast light-heavyweight bout as Anthony Perosh landed the first punch he threw, rocking Magalhaes badly. Perosh seized the poourtunity and landed nine unanswered punches on the ground, knocking Magalhaes unconscious. The 41-year-old scores his first pure knockout in his career and is now 4-1 as a light-havyweight in the UFC. He has finished all four of those bouts.

Official Decision: Anthony Perosh defeats Vinny Magalhaes via knockout at :14 of Round 1.

Viscardi Andrade defeats Bristol Marunde via TKO at 1:36 of Round 1.

Sergio Moraes defeats Neil Magny via Submission (triangle-choke) at 3:13 of Round 1

Amanda Nunes defeats Sheila Gaff via TKO at 2:08 of Round 1

Anthony Perosh defeats Vinny Magalhaes via knockout at :14 of Round 1

For the latest MMA news and Event Play-by-Plays visit BJPENN.com